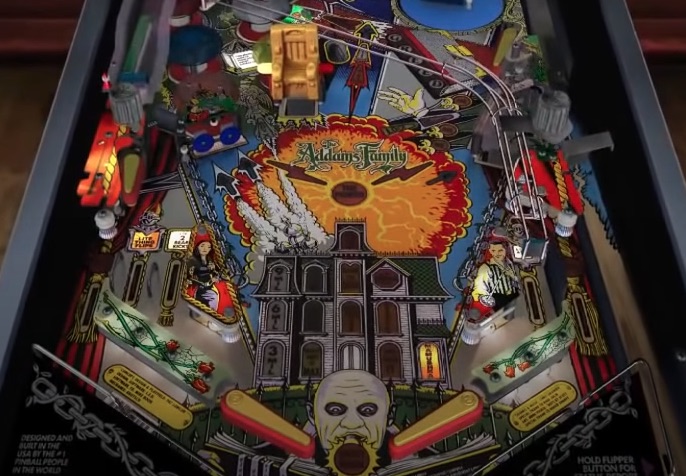 Is there anything more exhilarating than a pinball machine? You might have thrown yourself, upside-down, from an aeroplane, or hurtled through space on a rollercoaster, but nothing compares to watching that small, silver ball teeter on the edge of the flipper, before you smash it into the play field and score millions of points. Pinball is pure excitement, it brings back the sights and smells of the arcade: candy-floss, coppery pennies and neon lights .

Pinball1 is an arcade game in which players score points by manipulating one or more metallic balls on a play field, inside a glass-covered cabinet. You need to score as many points as possible, and use flippers to push the ball back up into the play field, before it falls down the drain into oblivion. Pinball is so iconic that Microsoft installed it in digital form on the windows operating system, from 95 to the release of Vista. Before the internet was in full force, my brother and I would rush home from school, gulp a glass of milk and play pinball on the ageing family computer.

Pinball machines have existed in some form since the 1930s, and their evolution is fascinating. During the Great Depression era, pinball games dispensed five to seven balls for a penny, creating much-needed, cheap entertainment. In 1933, electrification and active bumpers were introduced, and in 1947 came the flippers that kept the ball in play for much longer. There are several types of pinball machines, including vintage, classic, modern and even hyperpin pinball machines, which are PC powered and use large, LED screens.

What is the bestselling pinball machine of all time?

Released in 1992 and designed by Bally, The Addams Family pinball machine has has been sold over 20,000 times

Why is the Addams Family the bestselling pinball machine of all time?

Pinball made a massive comeback in the 1990s, after interest in pinball fell significantly during the video game boom of the 1980s. One of the tactics of pinball machine dispensers such as Bally/ Williams was to license popular movies and icons of the day, to create storylines for pinball games that would keep players hooked. This included The Addams Family pinball machine, which hit a modern sales record of 20,270.

Seth Porges3 unpicked the brilliance of the The Addams Family pinball game, when he wrote:

“The game featured plenty of next-gen features, such as a moving mechanical hand (Thing) that picked up balls, an enormous number of scoring modes and new dialogue recorded by the film’s stars specifically for the game. But the real reason for its success was that it had great game play. With well-placed ramps and shots leading into each other naturally, The Addams Family avoided some of the all-too-common pratfalls of the pinball machine. The game nailed the simple things, and virtually every game since has taken design cues from it”.

How do you play The Addams Family pinball?

The Addams Family pinball machine game card invites the player to “Explore the strange world of the Addams Family”. There is no single player goal, but there are two key objectives:

The Addams Family Mansion is located at the centre of the play field and has 12 “windows” which lead to different rooms. You can enter each room and receive an award for doing so. Collecting every award activates a “wizard mode” called Tour the Mansion. This awards you 50 million points, lights the extra ball and maximises the game’s five jet bumpers.

If you hit the ramp top centre of the play field, it awards ‘bear kicks’, which lead to extra points or mansion rooms and lighting extra balls. In some situations, a hit to this ramp activates Thing Flips. The machine takes control of the upper left flipper and tries to shoot the ball into the Swamp sinkhole at centre right for extra points.

Staircase Ramp is a left-side ramp which awards letters in the word THING, and points increasing in the millions (starting at 1 million on each new ball).

Once you you complete the word THING via the Staircase Ramp, hits to a scoop in the top centre of the play field awards bonus points

Graveyard is a set of five bumpers that increases the Graveyard Value, which you collect from the Swamp.

Train Wreck is a dead-end shot in the top-left section of the play field that awards points, assists graveyard scoring, and lights extra balls.

Grave is five targets scattered around the play field that award letters in the word “Grave”. When you complete the word, you gain millions os points.

There’s nothing more mysterious and exciting than discovering Easter eggs in games, and The Addams Family pinball machine has two fascinating ones, including a third egg in the Special Collectors Edition. You can access each of these Easter eggs by using a flipper and Start button code sequence specific to each egg. The results from these don’t alter the outcome of the game in any way. In order for the codes to work, the pinball machine must be in its Attract or “game over” mode. The Start button cannot be flashing to begin a new game, and the codes will never work if the machine is set for free play. The Easter eggs are:

When you activate this Easter egg, the names of the game’s creators will flash up loudly in red and white spots. To activate, press left button 13 times, Start button once, right once, Start once, left 2 times and Start once.

When Cows Dig for Gold (collectors edition only)

This is another humorous dot matrix. To activate, press the left button 12 times, then the Start button once, right button 5 times, Start once, left 4 times and Start once.

Due to the record breaking sales of The Addams Family pinball machine, Bally started producing the machine again for a limited run in 1994 as “The Special Collectors Edition”. Only 1,000 of these pinball machines were ever produced.

The Addams Family Special Collectors Edition pinball machine is often called the Addams Family Gold Edition Pinball. This is because the machine features alternative cabinet artwork with gold accents and gold coloured plastics for the Pop Bumper Caps, Vault and Things box. The machine also includes a smoked black plastic cloud topper on Backbox, a brass plated exterior trim, an “Extra Ball” buy in button on the front of the cabinet, and Special Collectors Edition software.