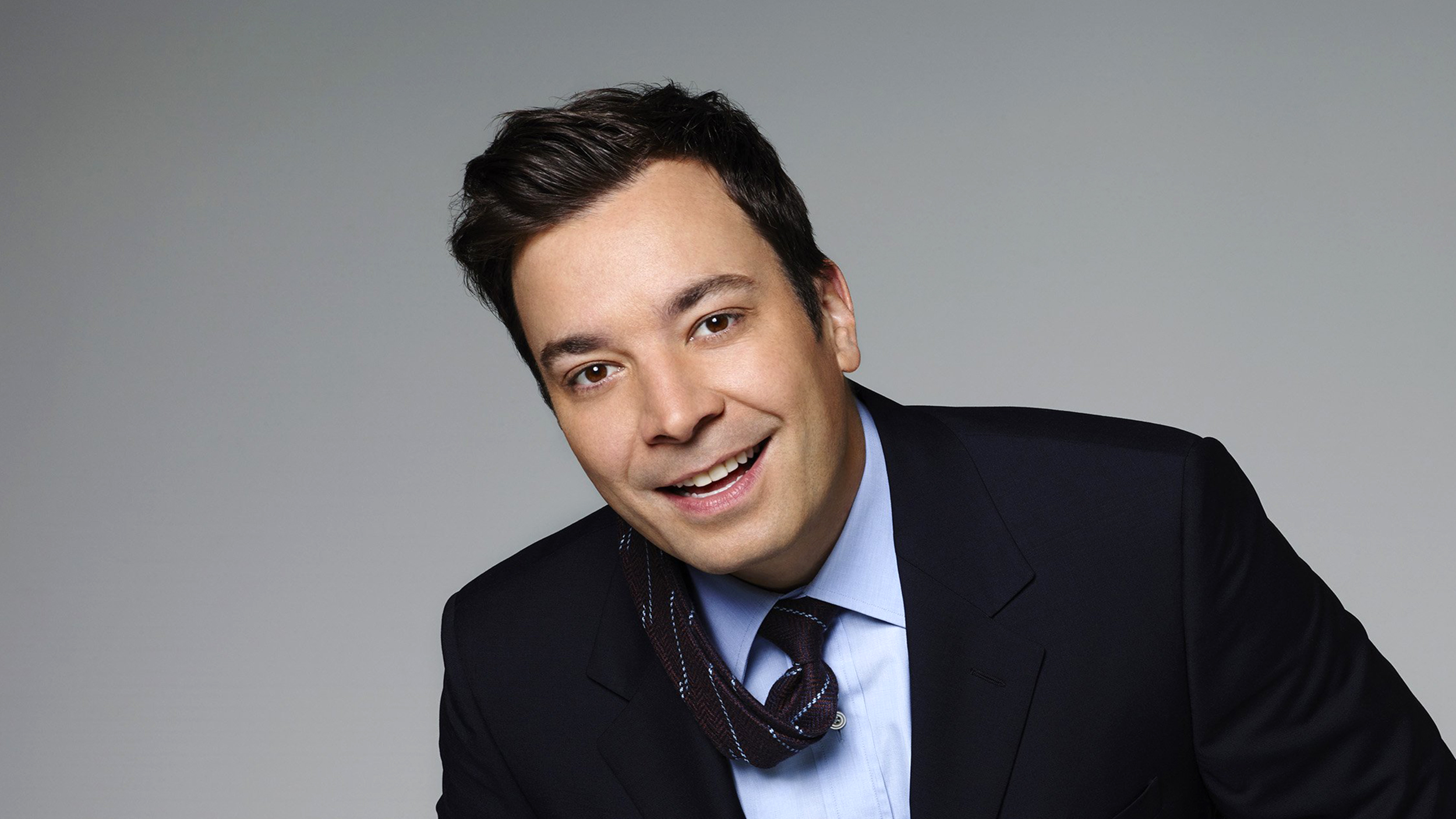 Jimmy Fallon (born James Thomas Fallon) is a US comedian, actor, singer and late-night host, known best for his work on Saturday Night Live and The Tonight Show Starring Jimmy Fallon. He grew up with a passion for music and comedy, and his career has been shaped by this.

Jimmy Fallon was born in Brooklyn, New York on September 19, 1974 and is now 44 years of age. His father, James W. Fallon, was a Vietnam war veteran. Jimmy also has an elder sister named Gloria, a name shared with their mother. The family is of German, Norwegian and Irish descent.

Shortly after his birth, the family moved to Saugerties, New York, a village on the bank of the Hudson river. Jimmy described his childhood there as ‘idyllic’. His mother admitted in an interview that they had been over-protective of the children as they were growing up. Jimmy and his sister were not allowed to leave the house, instead they rode their bicycles around the back yard.

During his teenage years, Jimmy and his sister would re-enact sketches from the late night show Saturday Night live, which he had developed an obsession over. Around this time Jimmy also started taking an interest in comedy and music, in particular he impressed with his impressions. He took up the guitar aged 13.

In terms of education, Jimmy attended the roman catholic school St. Mary of the Snow and then Saugerties High School. He later studied Computer Science at The College of Saint Rose in Albany, New York, though he later switched courses to Communications. However he left the college before completing his course in order to pursue a career in comedy.

After dropping out of college, Jimmy moved to Los Angeles where he began his career in comedy. He appeared regularly at the Improv, performing stand-up. Even now Jimmy still had an obsession with Saturday Night Live. He considered performing on the show to be the ultimate goal for his career. He auditioned in 1997 but was rejected.

Jimmy got a couple of small roles in films during this period, such as The Scheme and Father’s Day.

In 1998 Jimmy managed to secure a second audition for SNL. This time he impressed the show’s writers and producers with his range of impressions. Three weeks later he was called back to meet the show’s creator Lorne Michaels. There he was informed he had got the role.

Jimmy first performed on SNL in September 1998. Almost immediately he became a big hit. He remained on the show for a total of six years, eventually leaving in 2004.

After leaving SNL, Jimmy looked to start up his career in film. He was signed for major roles in two big releases, Taxi and Fever Pitch. Unfortunately, both films flopped with audiences and critics. This all but ended his film career.

Late Night and The Tonight Show

He then spent a couple of years back in New York. He described this time in his life as a ‘lost period’ in which he was unsure how to proceed with his career. Fortunately for him, before leaving SNL, Lorne Michaels had mentioned that he thought he would suit the role of late-night host. Michaels managed to convince NBC to offer him the role after the departure of then host Conan O’Brien. NBC executives reportedly initially hated the idea.

In 2009, Late Night With Jimmy Fallon debuted to mixed reviews. But over time Jimmy was able to make things work and changed up the traditional late-night show style, incorporating music, games and impersonations into the show. This change in style was able to convince critics and audiences that this role truly suited Jimmy. He remained host until 2013.

Then on February 17, 2014, Jimmy hosted The Tonight Show for the first time. He replaced Jay Leno and became the show’s sixth permanent host. At present he is still in this role.

During the filming of Fever Pitch in 2007, Fallon met and began dating the film producer Nancy Juvonen. They married on December 22, 2017. Together they have two daughters. They also have a dog who has made occasional appearances on Late Night With Jimmy Fallon.

Fallon’s mother, Gloria Fallon, passed away in November 2017. He paid tribute to her in an emotional monologue on The Tonight Show a week later.

He has also won a Grammy award for best comedy album for his album Blow Your Pants Off.